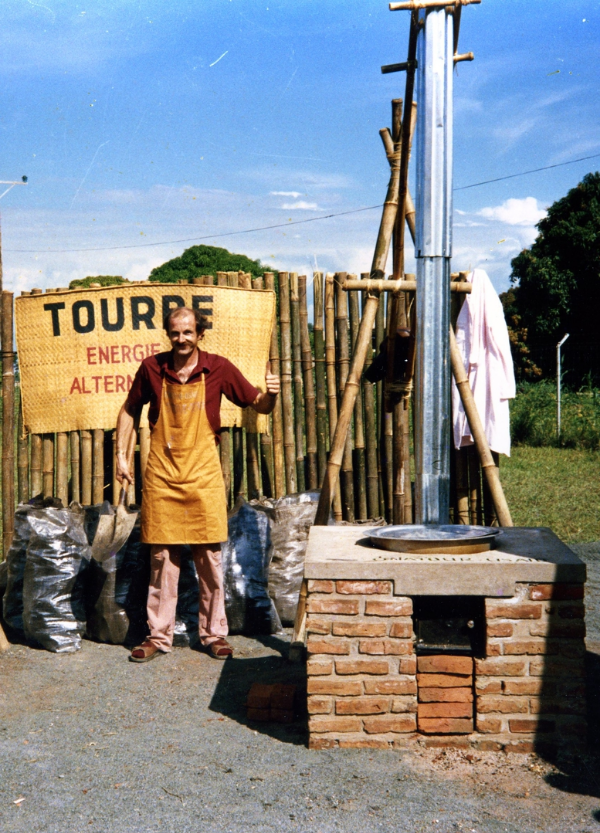 A successful dissemination programme on institutional stoves has been introduced in Burundi / East Africa.    Dr.Chris Adam was leading the Stove Project and designing the stoves.

The stove programme is connected to Projet Tourbe II, a multi-lateral cooperation between USAID, ONATOUR (Office National de la Tourbe) and the Irish Government. This is a project for the exploitation of peat (a kind of young coal) as an alternative fuel to wood. Around 800 tons of peat (la tourbe) per month have been sold in Burundi during the past few years in connection with the introduction of the new institutional stoves. As Burundi is a relatively small country (27.000km²) this peat project has become an important factor in saving wood and forest reserves.

In the past, most of the peat was sold to army camps since they did not require specially designed stoves and fuel efficiency was not a major factor. The first attempt to enter the private household market with peat failed due to improper stove designs and the fact that at that time (1982) charcoal was still cheaper than peat.

Since the beginning of 1985, peat has been actively marketed by ONATOUR as an alternative fuel to institutions like restaurants, canteens of schools, hospitals, universities, prisons and small industries. Although these institutions were buying mostly wood for fuel proposes, they were able to switch to peat easily when it proved to their advantage to do so.

Since few places had proper stoves in which to burn peat, the project offered the client a free stove when he agreed to buy one ton of peat. One ton of peat costs about $US70/ 8000FBU in Bujumbura and about $US50/ 5500FBU in the interior near the peat bogs. (5000FBU represents about the monthly salary of an unskilled worker at that time). The peat is delivered at no extra charge as a service of ONATOUR. The client signs an agreement in which the stove may be taken back if the client does not continue using peat.

Within a short period of time the STOVE TEAM (l'Équipe de Four) had a 2 month waiting list for people ordering institutional stoves. The STOVE TEAM consists of 3 specialized masons who are building 4 stoves at 2 clients per week. The stoves are especially designed for burning peat but can be used for wood and other fuels as well. The two stove types being promoted are the Burundian Community Stove (BCSt.) designed for large pots of about 50cm diameter, and the Two-Pot Peat Stove for casseroles up to 27cm Ø.

The stoves are build with bricks in a kind of sandwich construction. A strong and heavy cast concrete top plate (5 to 7cm thickness) keeps the stove together. The bricks between the top plate and the ground foundation are laid with adobe (clay or red earth /sand mixture). Only the ground bricks for the foundation are laid with cement to protect the stove from ground water. The joints between the bricks are sealed with mortar which gives an outer strong and water­proof shell to the stove. 25-35 kg of cement and 350 fired bricks are used for one community stove. Materials and labour cost about $US70/ 8000FBU which is about the same price as one ton of peat.

Design principles are that the stove contains a lot of hollow spaces for insulation and becomes a light-mass stove. The side and the back walls are build as double walls, filled with ash for insulation which enables the fire box to heat up quickly. This is necessary as peat burns smokeless only in a hot fire chamber. The percentage of heat utilized is about a high 29% as the pot is mainly sunken in the top of the stove. The flue gas temperature in the chimney is about 200°C to keep the water simmering in a pot without a lid. The chimney is kept short to limit draft. The exact size of the stove is adapted to the pots available! (pot-specific-stove).

The top plate is appreciated as a comfortable working place (table) for the cook. 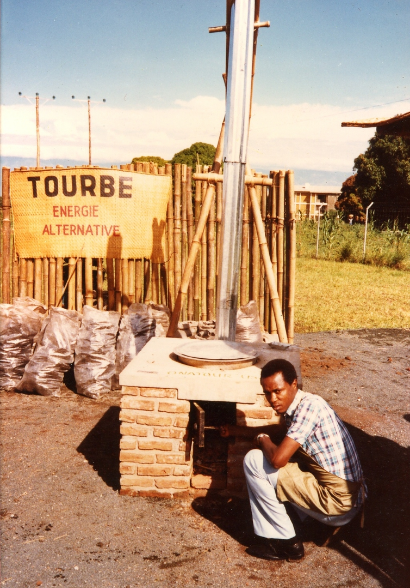 The life expectancy of the stoves seems to be long. After nearly one year of use the stoves are showing no corrosion. Some restaurants in the suburbs of Bujumbura report that they are spending ½ to ¾ of what they were spending before on wood fuel which was burned on a three stone fire. In most places, the fire is kept for 3 hours to keep big pots (40litres) of beans boiling. A European Bio Gas Project is using peat stoves to prepare food for 20 persons daily. They are using about 15kg of peat per day.

The BCST as a low-mass brick stove was a novelty at that time. At about the same time some metal institutional stoves were developed by Mr.Wiclaw Micuta (BELLERIVE FOUNDATION) in Nairobi / Kenya. In addition the Kenyan Jiko Charcoal Cooker (USAID; WORLDBANK) appeared at that time and Mrs. Hilda von Krosig/gtz worked on small mud stoves for rural households.

I visted ONATOUR in BURUNDI after 18 years in 2003. The STOVE TEAM is still active and Burundi Community Stoves and Multi Fuel Bread Ovens are still build by some of the same people I trained! (and giving homage to John RUSURE my counterpart and Stove technologist who passed away in 1996) 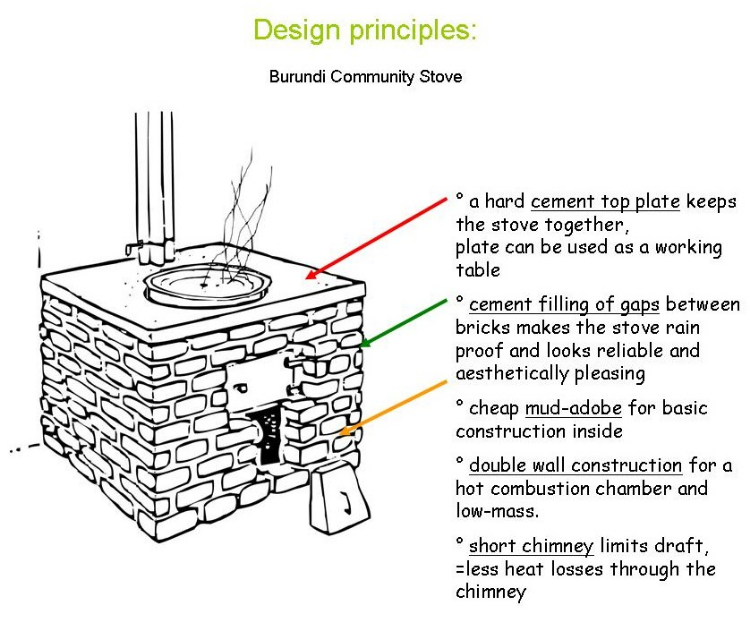 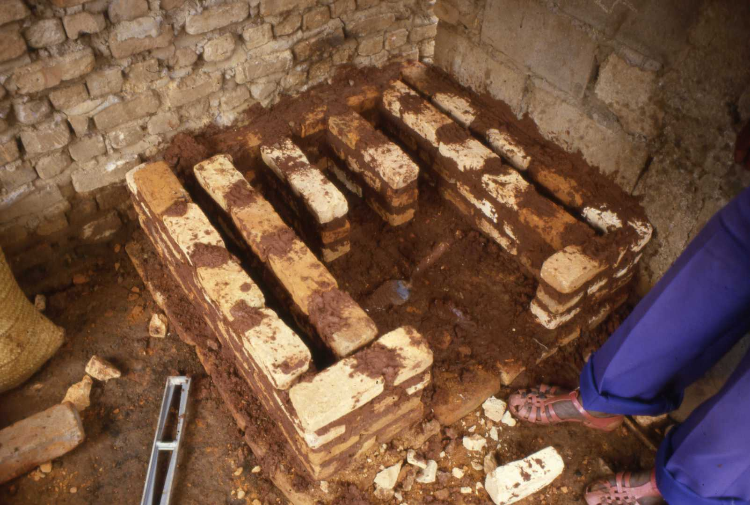 No cement needed for constructing the inner part of BCSt. 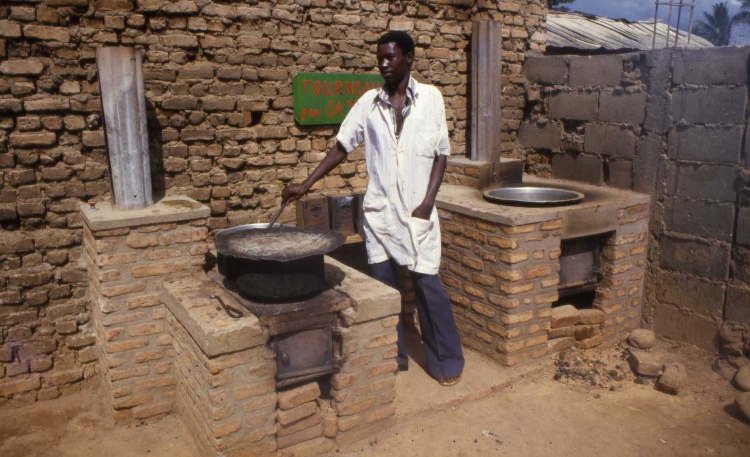 Observe the low height of the chimneys to reduce draft which could take too much heat from the stoves... 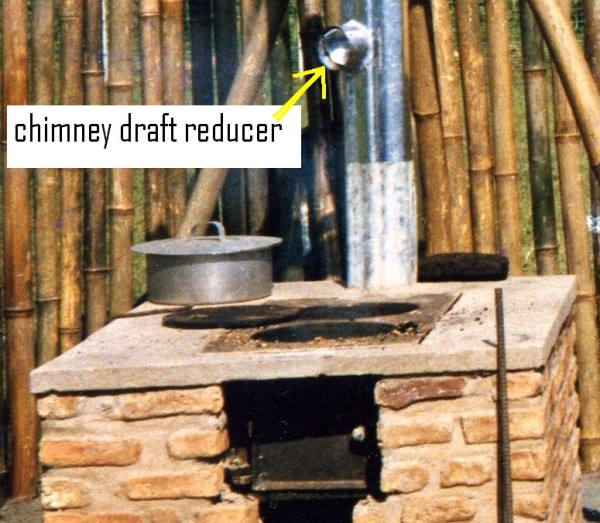 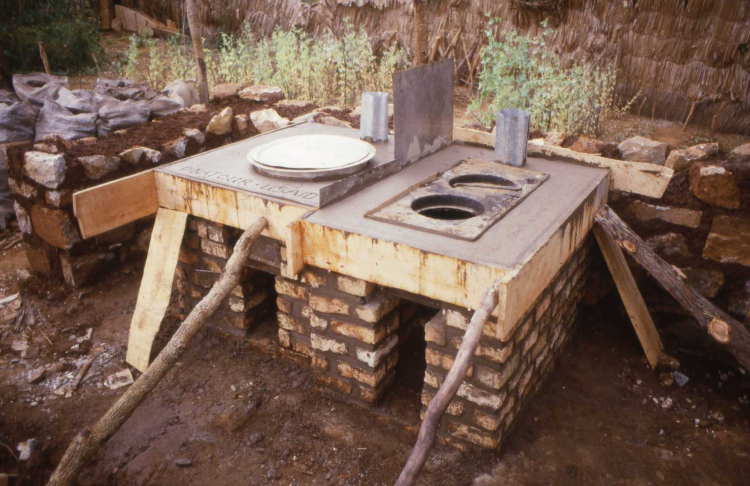 Casting the top cement plate, Instituional stove for a restaurant in Bujumbura 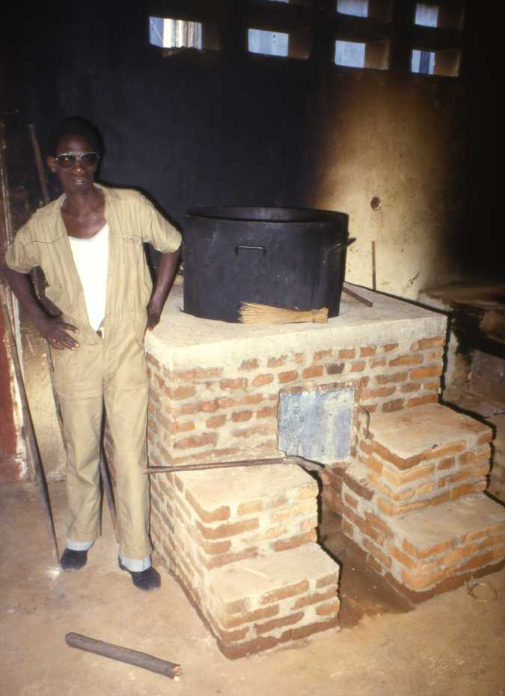 Michele, one of our stove technicians, large institutional stove at the harbour cantine of Bujumbura 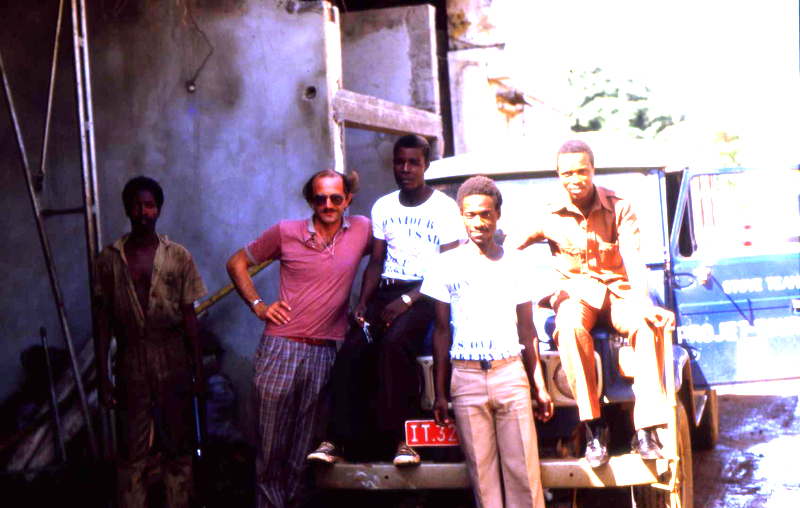 Part of this information to find under:
http://www.bioenergylists.org/stovesdoc/Adam/BCS%20Burundi%20Community%20Stove_2pix.pdf

What a surprise to hear these kind words in 2015 per e-mail from a Burundian (Mons. Laundry Mvuyekure)- after 25 years of my work at ONATOUR: “I know you and a friend who passed away- did work here, You should be proud, ONATOUR still uses what you built…”

Some interesting link on a rocket stove: